Week 3 is in the books! Time seems to be both going quickly in the big picture and slowly day to day, so I’m still making an effort to be conscious of my daily experiences and interactions.

Byron certainly turned out to be the cozy little hippy town everyone had described. On Saturday night I took my time settling in and heard live music start up at the restaruant next door to the hostel, called the Treehouse. I needed dinner, so grabbed an outdoor table and a pizza and enjoyed the tunes!

On Sunday morning I met a girl named Natalie over breakfast. She and a friend were on their way up the coast on a 2 week trip, planning to leave that afternoon. She’s from Canada, so we had an easy time getting into conversation. We quickly said goodbye as she was heading out to catch the bus and I went down to the beach for a few hours to catch some morning sun. The beach across the street from the hostel is called Belongil Beach, and it’s a dog beach! I loved the privacy of this small stretch and got to watch dogs playing in the ocean all week which was such a treat. Around lunch time, I went back in to catch the shuttle into town. I ran into Natalie again who had actually missed her bus due to a mishap with her passport, so she would be around until later that night. It all worked out and we ended up spending the afternoon in town together which was really nice!

There was a local artisan market that afternoon, so we spent a few hours wandering the rows of stalls and food trucks. Similiar to the markets I found in Sydney, but on a larger scale and way more casual and relaxed. There was live music everywhere too. The people watching was equally good, so many people with unique style, hair, tattoos… and majority barefoot, which is awesome. The stalls were filled with clothes, jewelry, bags, trinkets, but nothing too cheap or at all gaudy. You got a genuine taste for the local business of the area, and I was excited to pick up a medium sized tapestry with a fun Middle Eastern/mandala design that I can use as a beach blanket, sheet, towel, etc. We then wandered the main streets a bit, sat near the beach and finished the afternoon with a happy hour drink at a nautical themed rooftop bar/restaruant. It was a great afternoon! After Natalie caught her bus, I went to the grocery store to get my rations for the week, made dinner that night and slept well ( I specifically wrote in my journal that I slept well that night, so worth mentioning lol).

On Monday morning I got up for the yoga class and had a nice session. The instructor was really great and helped me achieve a nice sense of peace during the practice. At the end, she mentioned that in Byron the old land has a force of energy, causing many people to experience ups and downs while being there. She encouraged anyone feeling it to ride out both the negatives and positives and that things will eventually come together as they should. It really resonated with me because for the few initial days in Byron I did feel a little “weird”. I’m sure it is a combination of me really still settling into this trip, becoming more comfortable with myself, and transitioning into this new lifestyle. But nonetheless, it was helpful to hear someone else acknowledge these emotions, despite the fact that everyone may experience them in their own way. The rest of that day was very casual. I found that I had to check myself a few times as I was feeling a bit emotional about the whole experience. Sometimes when I think too much about this trip, and that I am here doing it alone, it gets really overwhelming and stressful in it’s own way. I haven’t second guessed being here at all, but sometimes the doubt creeps in about whether or not I’m doing things “right”. Am I traveling in the right direction for this time of year? Am I being social and friendly enough? Am I staying in the best hostels, doing the best daily activities, to be in a place to meet like minded people? Will I be able to figure out how to do farm work, get a van, get an apartment or job in a more permenent place, etc. over the course of the year? I think that so many people from all over the world travel the country here in such a variety of ways, that it is easy to wonder if I’ve planned as best I can, especially when I haven’t necessarily met anyone who is doing roughly the same itinerary I am planning over the next month or so.

Anyways, I woke up on Tuesday with a bit of a renewed sense of purpose and went into the travel desk that is attached to the hostel. I spoke with an agent, Max, who was about my age and also staying at the hostel. She was awesome! I talked to her a little bit about what I am doing here, some things I would like to see, my timelines, etc. and she helped me to put together an itinerary that would take me through the first week of January. I had decided that I didn’t want to stay in Byron unless I committed to finding a job there, and I just wasn’t ready to do that yet. I still want to keep moving while everything is new. She helped me lay out a day by day plan to hit all of the must-do spots going north up the coast. I will be doing this on the cusp of the rainy season, so I am going to keep my fingers crossed that the weather holds out for a few weeks, otherwise I will need to reevaluate some things! I won’t go into detail about the itinerary, since I plan to document as I go along, but it helped me to gain a new sense of purpose moving forward, and also solidified my locations for the holidays.

On Wednesday I did yoga again in the morning and went for a run on the beach. If I chose to stay in Byron, I would have plenty of time to get fit that’s for sure… That night I went into town and treated myself to a nice meal at another local restaurant with a beachy casual vibe. I had a really good curry dish and also enjoyed some live music right through the window I sat in! Very content. That night the hostel had a wine and cheese night and as I was sitting outside with some people, I saw a guy that I was 99% confident I knew. One of my closest friends from Belgium, Tay, had told me her brother Sam was living and working in Byron. She had told me the name of his restaurant, but not where he was staying. Anyways, this guy walks out and I am convinced it it Sam, so I went up to him and introduced myself, and I was right! We totally laughed about the small world we live in, and I loved catching up with him a bit. It somehow felt like I’ve known him forever, probably a family thing because Tay is the same way! Love you guys. Sam introduced me to a number of his friends who were also working at the hostel, and it was cool to learn a bit more about the whole “work for accommodation” gig. He said that a lot of the longtimers/workers who had been around the hostel during the off season were just leaving, so he was also experiencing his own sense of change. He said that during the past few months there was a really tight knit group of people living and working at the hostel and I can definitely see the benefit of that set up and how you can really connect with other people in the same situation.

Thursday was sunny, finally! So I spent most of the day on the beach which felt really good. That night I went for drinks at Sam’s restaurant with a friend of his, and we ended up bar hopping a bit too, so I felt like I got a nice little tour of the downtown nightlife.

On my last full day, I did the lighthouse walk which seems like pretty much the biggest touristy thing to do in Byron. I walked from the hostel, which proved to be about a 7 mile round trip excursion, and felt good! The trails leading up to the lighthouse were really pleasant and I was treated to ocean views the entire way. One of the lookouts is marked as the eastern most point on mainland Australia which is pretty sweet. I also saw a ton of dolphins playing in the waves! I was happy to finally see some wildlife, because Byron is especially known for dolphins and whales during the year. The walk definitely upped my appreciation for the area and I could really see why people choose to stay for longer periods of time. It just feels comfortable, and away from real life in a way.

On Saturday morning, I caught a Greyhound north to Surfers Paradise on the Gold Coast. It was about a 2-3 hour trip by bus, so no complaints there. I’ve spent the past few days here, which I’ll cover in my next post. Happy to report that all is well and I am still doing my thing here!

Sunset over the hostel 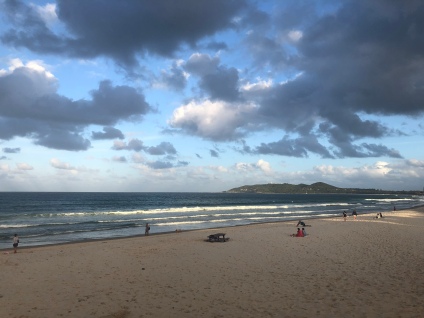 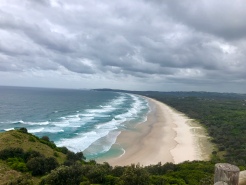 View from the Lighthouse hike

View all posts by ginaperrotto